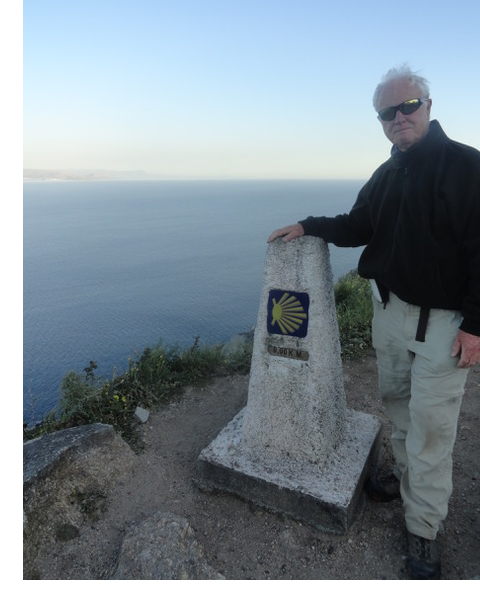 Clifford Clement, Bristol class of ’73, sips a steaming cup of café americano as he proudly displays a shiny scallop shell stamped with the cross of Saint James. This iconic symbol, a shaft of the cross which tapers down to a sword, metaphorically points to the direction of El Camino de Santiago, “The Way of Saint James”.  The symbol pays homage to the Knights Templar which protected the pilgrims along the holy route. In May, Cliff will embark on the Portuguese Camino, his sixth pilgrimage, and walk several hundred miles to raise money for Bristol Community College’s Helaine Schupack Endowed Scholarship.

The lines on the scallop shell represent the paths of life. “Everyone is on a different path,” said Cliff. “But we all arrive at the same destination.” Cliff will begin his journey at Oporto, Portugal and walk 15 to 20 miles per day.  He will rest at Albergue de Peregrino which is a hostel equipped with spartan accommodations such as bunk beds, communal showers, and toilet facilities. As a solo walker, he will partake in simple peregrino menu, or communal meals such as soup and salad which are sometimes prepared by the clergy. The scallop shell is an ancient pilgrim symbol, he will wear it on his back pack identifying him as a pilgrim.

The European tradition of providing support for the pilgrims dates back to the spread of Christianity. Like the travelers over 2,000 years ago, he will look for the scallop shell painted on houses, stones, trees and way markings. It is not uncommon for the villagers to leave water and fruit for the pilgrims to help provide sustenance.  He welcomes the frequent call of encouragement “Buen Camino”! The emblems of scallop shells, used as road signs, will guide him through rain, snow, and the mountains during the day as stars will light the sky as he travels at night. “There were no lights back then,” quipped Cliff. “The pilgrims followed the Compostela, the field of stars, which is the Milky Way as their guide.”

Although Cliff was raised Catholic, the trip started off as an adventure and then evolved into something more spiritual. “I read about the Camino years ago in Boston Travel,” says Cliff. After retirement from the Fall River Fire Department as a lieutenant from Engine 5, walking the Camino de Santiago was on his bucket list. He has been walking it every year since he had his hip surgery. “The experience put me on a different path of enlightenment, and I have met people from all over the world,” he said. “Spiritually, the experience alleviates burdens and other people ask me to pray for them as I walk.” He starts everyday with an intention and walks in gratitude for the life he has experienced.

Walking in the footsteps of Saint James, an original disciple of Christ, instills a sense of tradition and purpose in his life. Legend has it that Saint James traveled the Iberian Peninsula performing missionary work and spreading Christianity. When Saint James returned to Jerusalem, he was beheaded by Herod, King of Judea. This act of barbarism and hatred for the Christians turned Saint James into a martyr.

Cliff also has a deep appreciation for history and is excited about walking the same ancient routes as the Roman Legions. “I discovered a bridge that had a three-inch imprint from the tracks of a wagon wheel from thousands of years ago,” he said. On one trip he wandered into an olive grove and the farmer told him that they had been planted by the Romans. “As I travel, I feel like a person from long ago,” stated Cliff. Although the trip will provide beautiful vistas of quaint villages, and pastoral country sides, there is a physical price for the view. 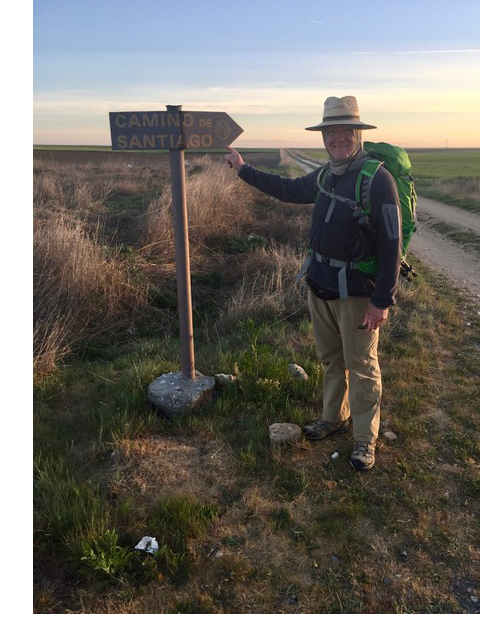 Walking El Camino is a test of physical endurance and mental acuity. The first time Cliff attempted the pilgrimage from St. Jean de Pau in France, he traveled through Basque country and the rugged Pyrenees. As he walked in the rain his feet began to blister. “The skin on my feet peeled off and I was on the verge of getting an infection,” said Cliff. He walked 13 miles to the nearest hospital to seek medical treatment and to have a day of rest. “I questioned what I was doing here but I kept on walking and I am proud to say I walked every step.”

He believes the pilgrimage has transformed his life. “I now live with gratitude,” he said. Experiencing the same hardships as the pilgrims before him has made him more sensitive to other people and he has developed his sense of altruism. This year Cliff will walk to raise funds for the Helaine Schupack Scholarship. “I will donate the pledges to honor my friend Alan Lizotte, who started the scholarship in honor of his instructor, Helaine Schupack.”

Cliff met Alan after they both returned from the Vietnam War and were enrolled as students at Bristol Community College.  “We shared an apartment on Hall Street near Leddy’s Bakery,” he said.  That is one of the reasons that the Helaine Schupack Scholarship is so dear to his heart. “I was in the same boat as many students when I came home from Vietnam,” he said. “The GI Bill® only went so far, and I had work to support myself.”  Working often interfered with his studies and he realizes how difficult it to be a student and try to survive financially.

The scholarship provides support to a full-time enrolled student with preference given to an adult learner over the age of 22 who needs financial support for his or her education. It funds related expenses including but not limited to tuition, fees, books and supplies and any emergency financial assistance needed.

Cliff said that Bristol Community College opens doors. While his friend Alan attended B.C.C., his instructor Helaine Schupack, recognized his talent in mathematics. “Alan was working at American Tourister on Globe Street making suitcases,” said Cliff. “After attending B.C.C. for only one year, he transferred to Brown University with a full scholarship.”

Bristol also provided Cliff with opportunities. After graduating from Bristol in “73” he earned a bachelor’s degree from SMU in sociology and then a degree in occupational therapy from Quinsigamond Community College. He also remembers the struggles he went through to obtain a job as a firefighter. “Massachusetts has Veterans Preference for combat veterans for civil service jobs. Veterans’ preference was contested in court. Contesting that benefit in 1976 was due to negative sentiment about the Vietnam War and this mirrored the disdained attitude and treatment toward Vietnam Veterans at that time,” he said. The issue went to the Supreme Court which upheld the benefit to veterans. “It took me four years to become a firefighter.” He returned to Bristol to attain a fire science degree.

Walking Camino de Santiago is also good therapy. Spiritually it can help you overcome burdens. “It helps me deal with the war and some of the horrific things I have witnessed as a firefighter,” he said. Walking becomes a moving meditation, coupled with “mucho” determination. “I pray a lot as I walk because it seems like the natural thing to do.” He has mentored 12 people in preparation for the walk and is willing to help anyone else who is interested. He would also like to mentor Veterans who may be interested in walking.  “I believe walking Camino de Santiago would help Vets with post-traumatic stress disorder.”

There are many different starting points and routes, but just like the symbolism behind the scallop shell, the pilgrims meet at Santiago de Compostela in north-west Spain. When Cliff arrives, he will partake in a pilgrim mass which culminates in a celebration to honor those that have completed the ancient routes. “The names of the pilgrims are recorded along with the country they come from and read off during the mass,” said Cliff. “The experience is powerful.” For the religious, the experience can be cathartic because the remains of Saint James are believed to be interred at the Cathedral of Santiago de Compostela. 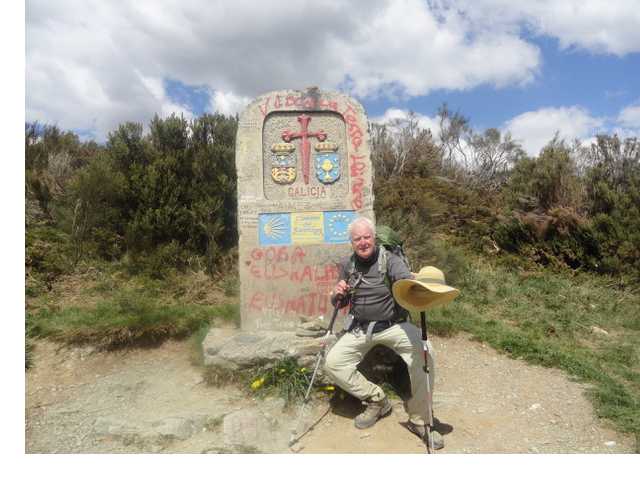 This year Cliff will continue along the rugged coast of Galicia until he reaches the Atlantic Ocean. Cape Finisterre was believed to be “The End of the World” in ancient times. “People believed the world was flat,” he said. Standing there as the Sun sets into the ocean you can understand why. Part of the experience is to retrieve a scallop shell from the ocean as evidence to tell the world you had completed the journey.

Cliff began walking the Camino at 64 and he is still walking it at 70. “I will probably be walking various Caminos the rest of my life,” says Cliff. He hopes to live long enough to walk the Camino with his grandchildren. “I’m 70, my oldest grandchild is only seven, so the numbers don’t look good.” He and his wife and I buried a time capsule for them at the Santa María A Real do Cebreiro, a church known for miracles.

He hopes that one day his grandchildren will walk and discover the contents.

It is said that the Camino never ends, and at the end there are new beginnings. For Cliff, that mantra has culminated into six years and six Caminos. “Last year I walked for the Fall River YMCA, and this year for the special scholarship at Bristol Community College,” he said. He never thought walking the Camino de Santiago would become an intricate part of his life. “It is a wonderful feeling to reciprocate to two organizations that assisted me in my life.”

Cliff is dedicating this year’s Portuguese Camino to raise funds for the Helaine Schupack Scholarship. “Bristol is a great asset and enhancement to the community,” says Cliff.  He would like to encourage any alumni or member of the community to support the Helaine Schupack Scholarship Endowed Fund which is designed to provide financial assistance to students who are in need.

Cliff says it is better to give than receive. “It is a wonderful feeling, you should try it,” he said. “Thank you and buen Camino.”

Follow Clifford Clement's journey through Portugal with the image gallery below. 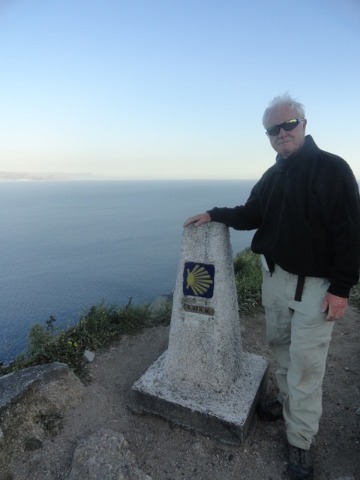 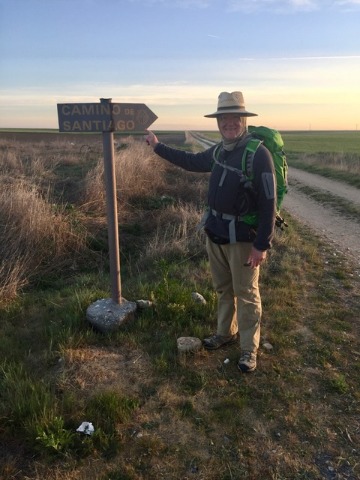 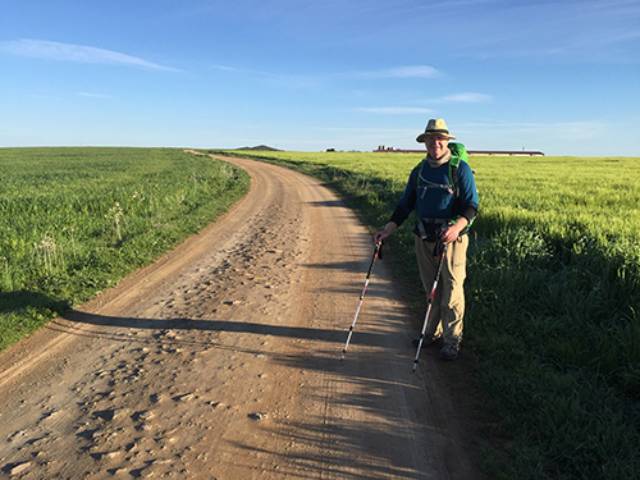 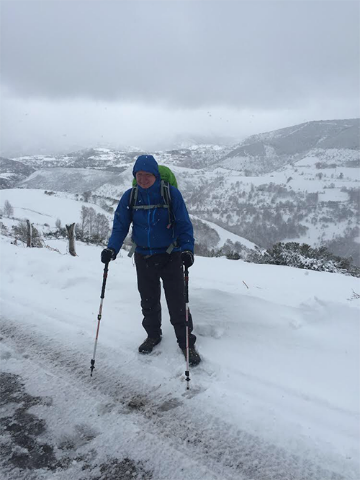 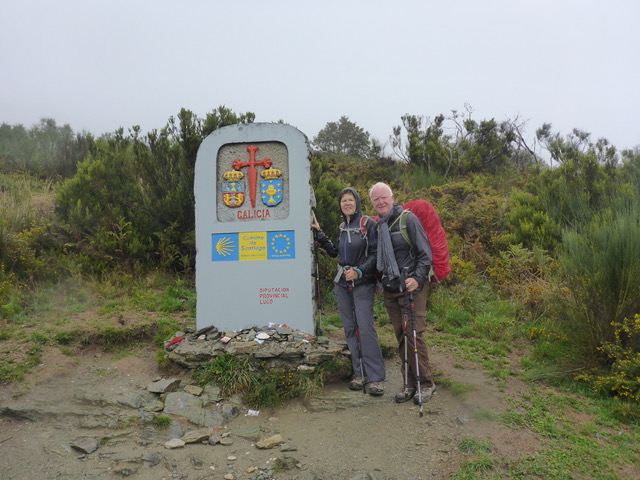 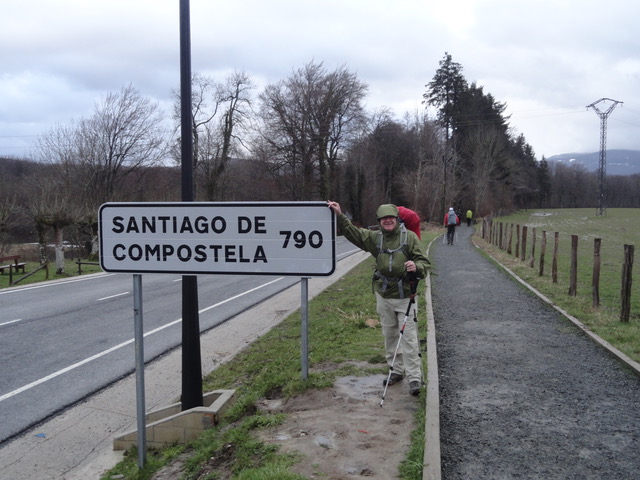 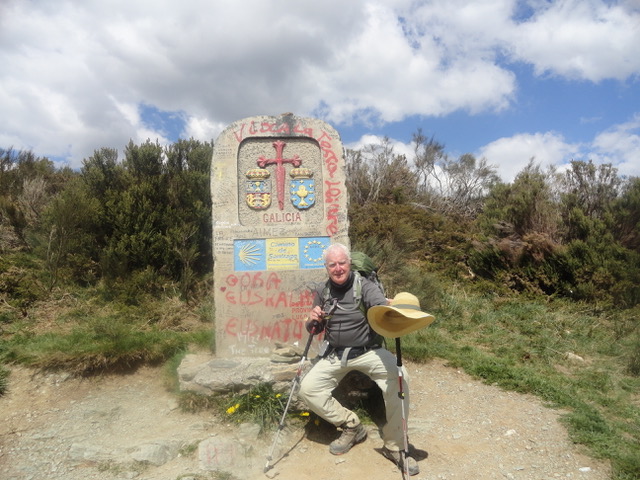 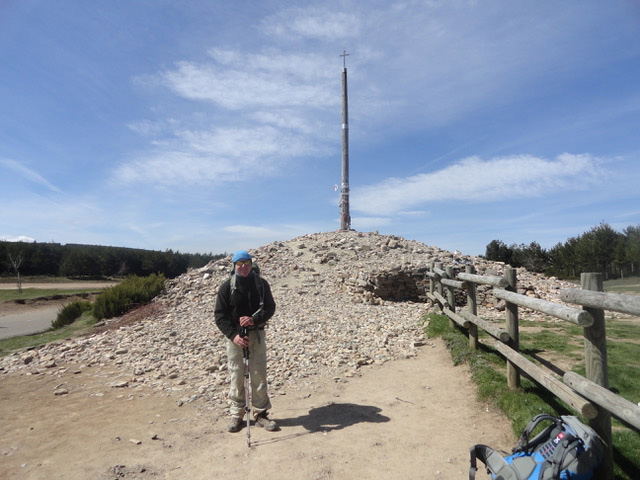 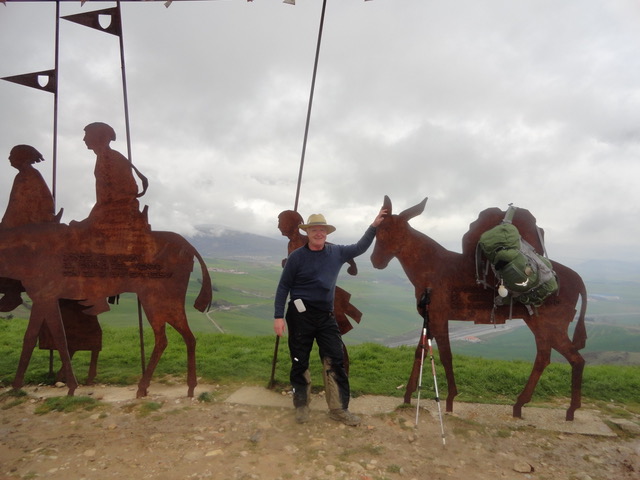 GI Bill® is a registered trademark of the U.S. Department of Veterans Affairs (VA). More information about education benefits offered by VA is available at the official U.S. government website: https://www.benefits.va.gov/gibill/.